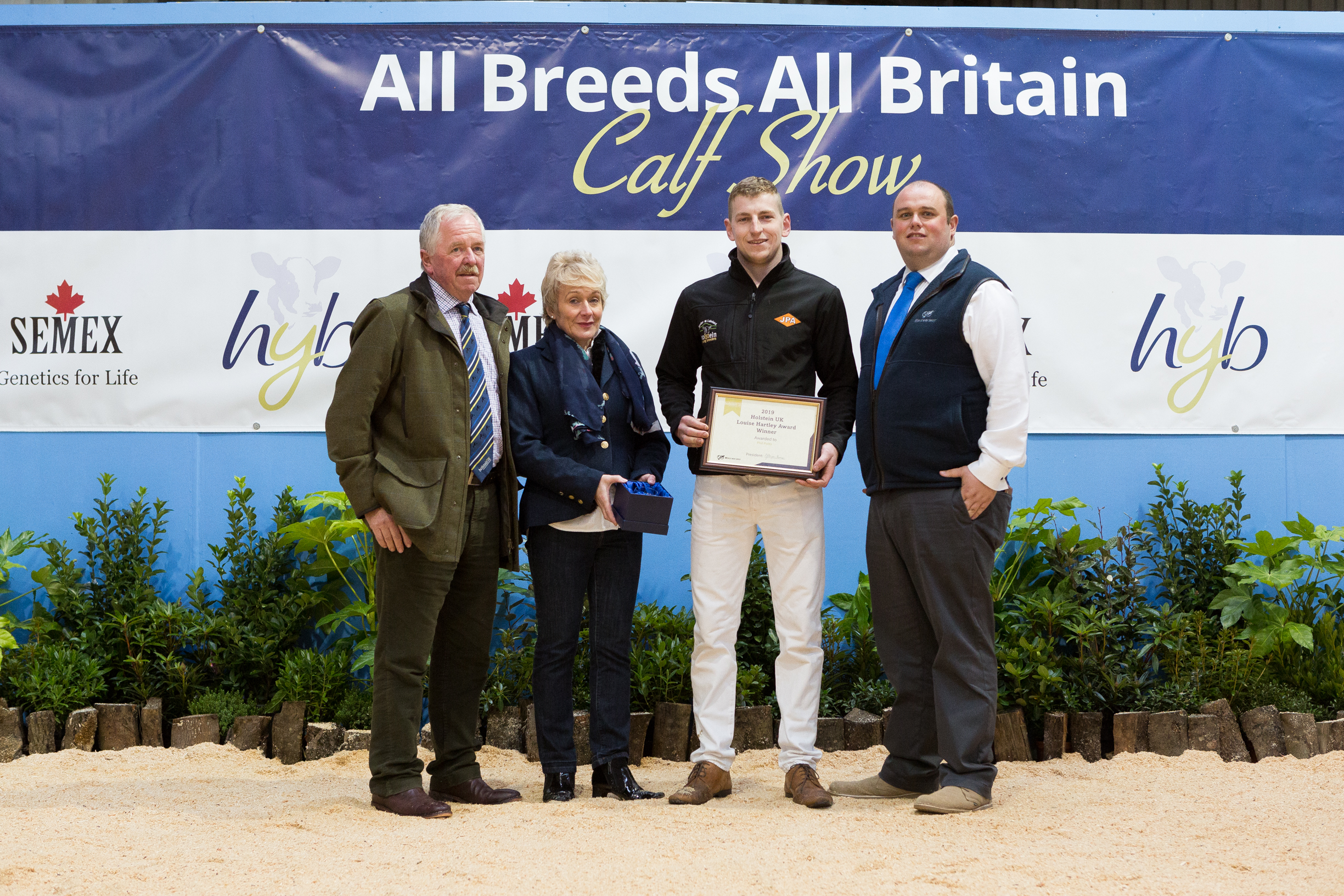 Holstein Young Breeders (HYB) is delighted to announce that this year’s winner of The Louise Hartley Award is Phil Potts of the Border and Lakeland Club. The award was presented to Phil by John and Sarah Hartley at the All Breeds All Britain Calf Show on Sunday 20th October in recognition of him continuously going the extra mile for his club.

The Louise Hartley Award is sponsored by World Wide Sires, in conjunction with the Louise Hartley Memorial Fund and was introduced in 2017 in memory of Lancashire HYB member Louise Hartley who sadly lost her battle to cancer in 2016. As a remarkable ambassador for British farming, with a passion for livestock, HYB felt this Award provided some recognition of the inspirational talent shown by Louise.

World Wide Sires were announced as the new sponsor of The Louise Hartley Award in August and will be providing Phil with a trip of a lifetime to attend their Global Training Centre in Washington State, USA. The eight day intensive training course has been specifically designed to advance the knowledge and skill of each individual attending. Working alongside trainers, vets and World Wide Sires consultants, the course participants will receive one-on-one training and experience the latest developments in Artificial Insemination and dairy management.

Commenting on their sponsorship, Mike Halliwell from World Wide Sires said “World Wide Sires are proud to sponsor the Louise Hartley Award. To encourage the next generation of future dairy producers is directly aligned to the passion of the Hartley family and the Holstein Young Breeders organisation.”

Phil was put forward for the award by the Border and Lakeland Club for always being willing to help and having the time and patience to help the younger members of the Club. After graduating from Newton Rigg College, Phil went to work for his Uncles Stephen and Richard of the Carrock herd at Buckabank Hall. He then worked for a few local farms before gaining his current position working for Kevin and Christine Wilson of Warnelview Holsteins. Phil is currently The Border and Lakeland Club Chairman and recently organised several training days for the Club’s HYB members to help develop their knowledge of showing calves and reason giving.

Commenting on the award, Phil said “When my name got read out, I felt extremely proud and honoured to be part of Louise’s legacy. I am looking forward to the opportunity to go and meet people who use different farming systems and to see what I can learn from them.”

To qualify for the Louise Hartley Award, each affiliated HYB Club is given the opportunity to nominate one young breeder (aged between 18 and 22 years of age or under on the 1st January) to be considered. The person selected to represent the Club should be someone who has made an outstanding contribution to the breed, Holstein Young Breeders and, in particular, their own Club. The regional HYB Club Coordinators then vote on behalf of their Club for the person, not from their own Club, who they think is the most deserving winner.

Cerys Petrie, Events & National HYB Coordinator for Holstein UK, commented, “HYB would like to congratulate Phil Potts of the Border and Lakeland Club for claiming this very special and unique Award. Thank you to World Wide Sires for offering Phil a trip of a lifetime to attend their Global Training Centre next year. We look forward to hearing about how Phil has benefitted from the experience when he returns.”